A top predator looking for a good prey 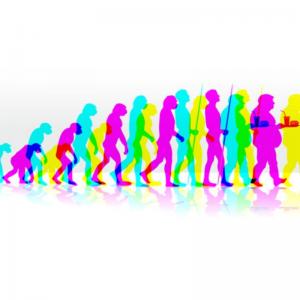 Homo sapiens differ from the monkey family because of our straight position, which allowed our forefathers to see further in the high grass of the savannah. But what also differentiated us was the ability to control our body temperature; primarily through a simple mechanical advantage, but also by developing our ability to sweat and thus cool the body. This allowed man to hunt during the heat of the day, when prey hunters normally rested. This allowed our ancestors to hunt their prey for exhaustion and gain access to nutrient-rich animal products. They climbed up the food chain and animal food became more and more part of their diet. These animal products were high in protein and fat and low in carbohydrates.

Nutrient-rich foods meant that less energy was needed for digestion and so more energy became available for other things, such as brain development.

“We did not evolve to eat meat, but because we ate meat.”

If we look at the biological value of nutrients, in this case, proteins, we can state that there is no single vegetable food source that, in itself, can be considered as a complete protein.

Some species are herbivores, other carnivores, and some omnivores, …

The conclusion is that if you can determine with which food a certain species evolved, then you also know for which food that particular species has been optimally adapted.

This resulted in the development of a specific intestinal flora based on the food that was eaten.

It is stated that 85% of chronic diseases are food-related.

Agriculture and the sudden change in our food environment

The discovery of agriculture totally changed our way of life and brought us to where we are today in just a few moments – in just four to five hundred generations. We started cultivating arable land, cultivating grain, settling in cities, and utilizing the diversity of craftsmanship in growing populations for barter, which led to civilization as we know it these days.

How could a human being, in such a short period of time, adapt his digestive system to this new, starchy diet?

And this while we took millions of years to evolve from primacy to the human of today.

Many researchers, including archaeologists and anthropologists, in particular, are beginning to realize that we are simply not physiologically adapted to the new food environment that we have created for ourselves. We went from a diet high in fat and protein, to a diet low in fat and high in carbohydrates.

Primitive people knew better what to eat for optimum health.

Inuit, Eskimos, Indians, … hunter-food collectors …Their diet was very simple, fat and meat. Animals also instinctively eat what they are intended for, what their bodies can digest. Here we are mainly talking about the animals that live in the wild and not the cows fattened by humans with grain.

There are also numerous studies on human populations.

The Plains Indians and the Masaï fighter troops, both described as large and athletic, did not show any symptoms of metabolic disease.

The Plains Indians evolved with the North American Bison and were predominantly hunters until the time of the American Civil War. When the Bisons were slaughtered, these people were forced to eat the Western diet, full of grains, sugars, and processed food. They are now one of the most obese populations in America. We see the same story with immigrants from different living and eating culture.

The Magic Pill on Netflix was an eye-opener for us :